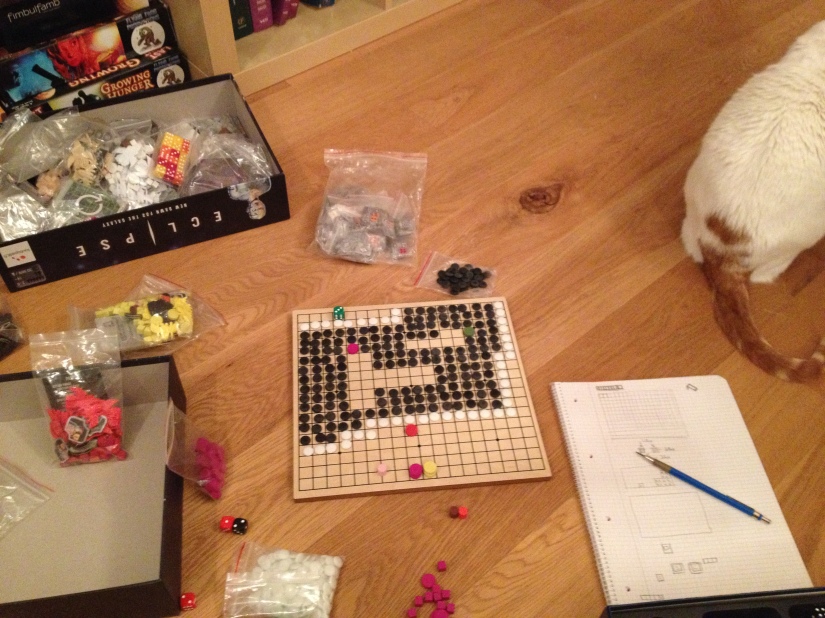 Making game mechanic prototypes out of board game pieces is rather easy since I have around 26 board game boxes in my living room, but to make it fun is another thing.

If you are making a prototype for a single player game with board game pieces, you should add another player to the prototype to control the constraints and puzzle elements.

From my standpoint, when I look at game mechanics and puzzles and I try to extract them to generic presentations. Meaning, I remove labels such as population, fuel, life, stamina and all that. I end up with rewards and connections that are very simple.

Resource could be anything, time(racing games), health(zelda or any game where you tend to die if you fail), a variation of plugs that influence the rate you can clear away an obstacle (turbo boost for your car, a shield booster for defense) and such.

Oppositions being the puzzles that drain your resources and force you to manage them in such a way that you can move forward. Enemies with weapons, blocks to push around to get loot and time constraints.

The rest of it is just themes that connect those elements to something you relate to directly or indirectly. Tetris relying on your OCD needs to tidy out of order elements, FPS’s rely on your territorial nature and testosterone, adventure games linking you to your explorers nature of finding and discovering.

So in essence, every game mechanic can be broken down to a simple system of resources and constraints. People like getting rewards and feeling that they have accomplished something. That they are building, nurturing, defending and every other instinctual trait that are tied to your natural opiate gland or other neural chemistry awesomeness.

Triggering those in the most simple and intuitive way seems to be the best design principle. If the game is left without a theme, you end up with something like Go or other faceless boards that are just there pitching one player against another. If you give Go a makeover, you can basically hide it under a Civ hat with familiar historical ideas and you can engage a lot bigger audience.

I might be over simplifying things, but I find the most interesting game designs to be the ones that manage to simplify and rely on recognizable items that are very intuitive to use and are very easy to learn(if you don’t already know them from your life experiences already). Being challenging(forcing you to build up skill and learn something while doing so), entertaining story or visual theme and in some cases where you rely on drama theory(such as in game of thrones the board game).

I love the idea of design by subtraction, like the video games Shadow Of The Colossus and ICO adhere to. It makes for an interesting game with very simple game pieces.

Spending a lot of time reviewing the mechanics I have to try and improve and simplify them. Game mechanics are still a bit misleading and dry without some context.

View all posts by villideveloper